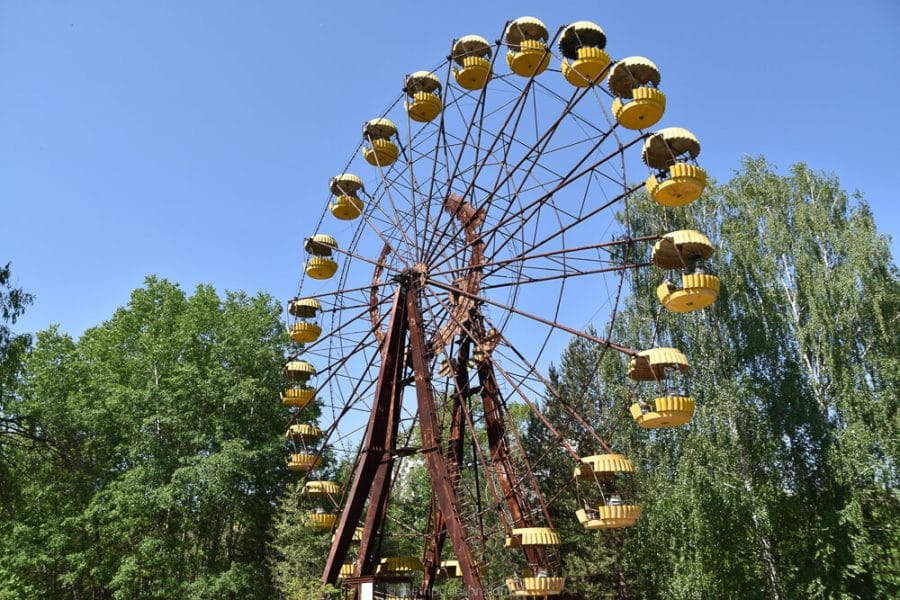 How to visit Chernobyl?

What’s it like to visit Chernobyl, the site of the world’s worst nuclear accident? Read on and find out how you can visit, what to see and do, and what not to see and do!

In the early hours of April 26th 1986 during a late night safety test, the number 4 reactor at the Chernobyl Nuclear Power Plant (NPP) exploded, sending radioactive dust high into the atmosphere and across much of Europe. It remains the worst nuclear accident of all time in terms of casualties and environmental impact.

How did the accident happen?

Staff at the Chernobyl NPP were conducting a series of safety tests to ensure that if power was lost, the cooling pumps would continue to do their job with the backup generators.

A major problem was that there was a gap of about 75 seconds between losing power and the backups kicking in and providing enough power to cool the reactor. During this small gap the reactor overheated to a critical level and a build-up of steam led to the reactor exploding.

Chernobyl is 90km North of Ukraine’s capital Kiev, very close to the border with Belarus. The exclusion zone stretches for 30km around the reactor.

Is it safe to visit Chernobyl?

Provided you go with a tour guide and follow their advice then it’s perfectly safe to visit Chernobyl for a few days without being exposed to dangerous doses of radiation. There are plenty of areas within the exclusion zones that are still highly radioactive and off limits. These areas are well signposted and you will also have a gieger counter with you to measure radiation levels.

The amount of radiation you will be exposed to is approximately the same as a trans-Atlantic flight, or two chest x-rays. For more information on radiation see the UK government’s page on ionising radiation.

Safety Tips for a visit to Chernobyl

Is it ethical to visit Chernobyl?

Chernobyl is the site of a catastrophic accident in which many people died. The exact number is not known, but the International Atomic Energy Agency estimates that the death toll is approximately 4,000 people who died as a direct result of the accident.

Only 2 people died in the initial explosion with another 4 being killed as a result of a helicopter crash. A further 29 people died within months of the accident from acute radiation syndrome, but the worst was still to come as 600,00 ‘liquidators’, soldiers and volunteers sent in to decontaminate the site, would be exposed to doses of radiation that would lead to thyroid problems, cancers, leukaemia and so forth.

Due to the delayed evacuation of nearby Pripyat and other towns and villages in the area, many residents, especially children due to their susceptibility to radiation, would go on to develop health problems as a result of the accident.

With the above in mind its important respect the place as the site of a disaster that had a huge impact on both people and the environment. If you would like help those affected by the disaster you can donate to the Chernobyl Children’s Fund.

What is there to see when visiting Chernobyl?

Hidden deep in the forest a few km from Chernobyl is the rusting remains of one of the cold war’s most closely guarded secrets; the Duga Radar Station. Measuring 150m tall by 700m long, it’s hard to imagine being able to hide such a giant structure as it raises it’s metallic tentacles above the forest, but hidden it is.

To get to the radar station you must first pass two checkpoints and then drive down an old track through the forest for what seems like an eternity. It’s not until you are almost upon the thing that this colossal edifice reveals itself. It’s a very eerie place as the structure creaks now and again from high up and radioactive warning signs warn of entering the surrounding forest.

Decrepit outbuildings covered in vegetation lie behind the metal structure and it’s possible to enter these and walk around. Inside the buildings the walls and ceilings are crumbling, as shadows rear out of the dark like nefarious beings trying to claw at you. Dusty books and other detritus line the floors, and I challenge anyone to walk through without feeling the hairs prick up on the back of your neck.

Chernobyl itself if is a small town with abandoned houses, a convenience store, restaurant/bar, small museum and the only functioning church in the exclusion zone. There is a monument to the fire-fighters (liquidators) who first attended the scene and tried to battle the blaze in the reactor.

A small park displays all the road signs removed from the exclusion zone that make a path to some commemorative sculptures.

The museum in Chernobyl is just two rooms and not as interesting as the dedicated museum in Kiev (which is well worth a visit).

The town may seem busier than one would expect as workers live here on 6 week rotation. That’s right, people still work at the Chernobyl nuclear power plant!

You can read more about Chernobyl Town and the Duga Radar Station here.

Unlike “busy” Chernobyl, Pripyat is a true ghost town (city actually). The city was built in 1970 to house NPP workers and their families. The population when the disaster struck was about 50,000 people. Pripyat was considered a golden posting and the modern city was a sought after place to live in the former Soviet Union due to its recreational facilities and relatively high standard of living.

If you are lucky, your tour guide will take you up to the top of one of the abandoned apartment buildings for a bird’s eye view of Pripyat over to the reactor and the Duga Radar Station. It’s incredible to see the city enveloped by the encroaching forest and an eerie place to watch the sun rise.

There are many interesting places to visit within Pripyat including the hospital, school, palace of culture and amusement park. Sadly, the park was due to open a few days after the accident and never echoed with the happy voices of families enjoying a day out. The rusting yellow ferris wheel is an iconic image associated with Chernobyl.

You can read more about my own visit to Pripyat here.

It’s possible to make a stop near the reactor which is now contained beneath a new sarcophagus that was completed in 2012. There is a memorial outside but the authorities are very strict about where you can take pictures here as it’s still a very sensitive area.

The wild dogs of Chernobyl

When visiting Chernobyl, it is impossible to miss the hundreds of wild dogs that roam the overgrown streets and forests. These dogs are the descendants of family pets left behind after the evacuation and are very docile and friendly. However it is not recommended to get to close as they will more than likely be carrying radioactive dust particles.

Places you should definitely not (and cannot) visit at Chernobyl

Rassorva is home to thousands of rusting vehicles that were used in the clean up operation. From soviet hind helicopters to trucks and earth moving equipment.

When the roof blew from reactor number 4, a huge amount of contaminated material flew up into the atmosphere. It was then transported by the wind a few kilometers onto what is now known as the red forest. Although the original site had been cleared, new trees have replaced the old and it is still one of the most radioactive areas with the exclusion zone.

This mass of melted corium is like the medusa; one look at it is enough to send you to the next world. Standing in the presence of the elephants foot for 300 seconds will see you dead within 2 days. Not that there is any way to get to this deadly molten mess as it’s located under the reactor floor which itself is covered by a giant steel sarcophagus.

Chernobyl: 01:23:40 is a fascinating account of what happened on the night of 25th/26th April 1986. The 2006 documentary The Battle of Chernobyl gives you a look at everything that went wrong and led to the disaster.

How you can visit Chernobyl

Chernobyl Welcome offer a range of tours from day trips to multiple day tours starting from 119 Euros. Click on the links below for more info!

Still not convinced? Have a look at these 10 incredible photos to inspire your visit!

Want to know more about “Dark Tourism”? Read here to find out more or check out my articles about the Door to Hell and North Korea.