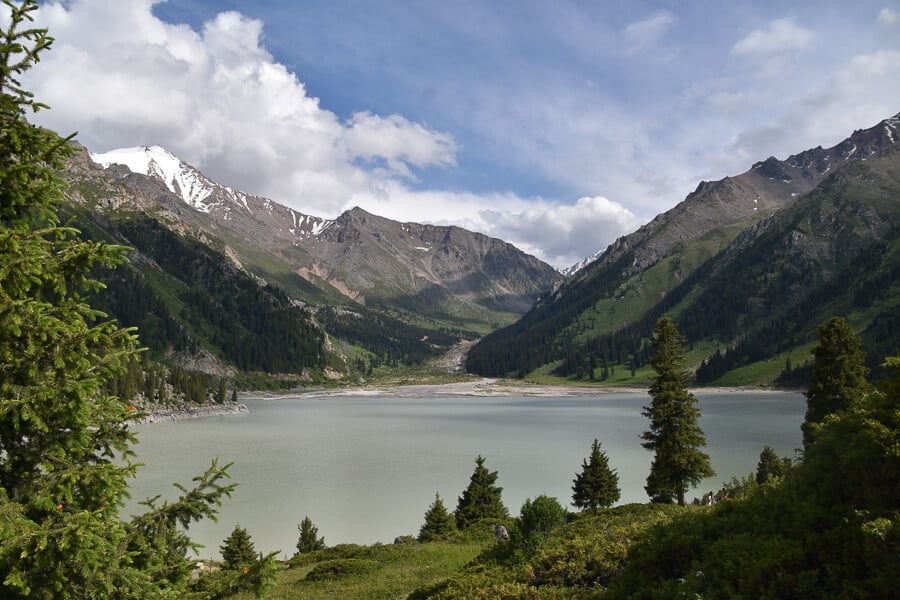 The lake is situated in the Il-Alatau National Park (entrance 400 tenge) approximately 15km from Almaty in Kazakhstan. The park hosts a diverse range of flora and fauna from wolves to golden eagles and makes an excellent escape from the city.

There is plenty of great hiking around the lake and along the Bolshoye Almatinka River that winds its way down the mountain towards the city below. The area is home to waterfalls, freshwater springs and stunning mountain scenery not unlike the Swiss Alps.

I had tried visiting the lake with varying degrees of success ever since my first trip to Almaty in 2017, but it wasn’t until 2019 that I finally got to see it in all its glory.

I have visited the lake in both winter (March 2018) and summer (July 2019). The best time to go is definitely in the warmer months (late spring through to early autumn). On my first fateful trip there the drive up into the mountains was a little scary as there was a snow-storm and visibility was less than one metre!

Needless to say the low-visibility meant we could see almost nothing of the frozen lake, but it was a fun adventure with a friend and our young Yandex (Russian Uber) driver.

In July 2019 the stars had finally aligned and my local friend Danny booked us a taxi up to the lake. I took a bus to his apartment on the outskirts of the city and then we made our way up into the mountains.

The driver had agreed to take us to the lake, wait for an hour and then drive us back to the city as there is no public transport. However, within five minutes he called Danny and said he had gotten a better offer and had left. Shit!

There wasn’t much we could do and decided to carry on around the lake and hope to hitch a lift back, otherwise it would be a very long walk!

The scenery around the lake was worth the three-year wait! Pine forest blanketed the hillsides like a giant green carpet. As it was a little cloudy the lake looked like a piece of slate rather than the azure blue it is under clear skies. Still, it was no less a magnificent site and we relaxed on the lake-shore taking pictures and enjoying a beer.

At around 5pm we decided to try and make our way back, conscious that we had no ride organized and there was no phone signal to book a taxi from Almaty. Thankfully after walking only a kilometer or so we were picked up by a crazed driver in a small van (as you can see in the video below).

How to get to Big Almaty Lake

The lake is situated 15km south of central Almaty very close to the Kazakh/Kyrgyz border. Getting to Big Almaty Lake is not possible by public transport alone and requires a little planning. Below are some of the ways you can reach the lake from Almaty.

Take a bus or taxi (see below) to Kokshoky and hike 15km up the road to the lake. If that seems too much, take a taxi to the GES 1 Sub station and hike the remaining 7km (2 to 3 hours).

A more scenic option is to take a taxi to GES 1 (a hydro-electric sub-station).

It is no longer possible to hike between Alma Arasan and Big Almaty Lake and if you attempt it you will be stopped and turned back by the border patrol (see Border Area below).

You can only take a bus as far as Kokshoky (also known as GES-2 after the small hydro-electric sub-station there). This is where the road splits in two. The right (westerly) fork goes to Alma Arasan while the left (easterly) fork goes to Big Almaty Lake 15 kilometres up the mountain.

The bus goes from the stop on Ulitsa Dulati next to the First President’s Park at the intersection with Prospect Al-Farabi.

From Kokshoky you can complete the journey by hiking the final 8 kilometres or by shared taxi/hitchhiking (see below).

A taxi to Big Almaty Lake will cost in the region of 5,000 tenge and take approximately 40 minutes.

It’s possible to negotiate with the driver to include waiting time and a return journey but this is not a good idea because a) it will give you a relatively short fixed time to explore the lake and b) because as happened to my friend and I, the driver got a better offer and left, leaving us stranded (we were able to get a ride back in a shared taxi after a short walk).

If you go to the bus stop at the junction with Ulitsa Dulati and Prospect Al-Farabi next to First President’s Park there are sometimes shared taxis going back and forward to the lake.

Expect to pay 2,500 tenge per person. This service likely only operates in the summer months during daylight hours and shouldn’t be relied upon.

You can attempt to hitchhike, but bear in mind that every car is a potential taxi in Kazakhstan and most people stopping will be expecting a fare.

You can try explaining that you are trying to hitchhike, but otherwise expect to pay something. You can learn more about hitchhiking in my article Is Kazakhstan Safe.

Many outdoors companies offer guided tours to the lake, and if you don’t mind losing out on the freedom then this is one of the easiest ways to get there. You can also hire a car and driver. Indy Guide offer one-day tours to the lake starting from $55 per person.

How to get back to Almaty

It is more difficult to get back to Almaty from the lake than the other way round. Unless you have pre-arranged your return journey, the options are to hope that a shared taxi will pass by or to walk 15km to the bus stop at Kokshoky in time for the last bus at around 5pm.

Because the lake is so close to the border (less than 10km) the area is patrolled by Kazakh border guards. It’s not possible to get right down to the lakeshore on the eastern side without the border guards shouting at you to go back, but you can climb the hill above the lake for impressive views.

Be aware that some of the mountain passes reach altitudes of almost 4,000 metres (Zhusalykezen Pass is 3,336m, Pik Bolshoye Almaty 3,681m and Pik Turist at 3,954m) so if you plan on reaching any of these you should acclimatise over 2 days and camp overnight.

Ensure you have some Diamox with you as AMS (acute mountain sickness) can affect anyone regardless of fitness level.

Be Prepared for all weather Conditions

Even in summer the weather can deteriorate very quickly in the mountains and you should ensure you are prepared. Pack warm layers and waterproofs in case of blizzard (like the one I experienced in March 2018).

When is the best time to visit Big Almaty Lake?

Summer (June to September) is the best time to go. In spring the lake is still frozen and visibility can be almost zero. I visited in March 2018 and couldn’t see anything, even though it was warm and sunny in Almaty.

Where to stay in Almaty?

You can find many hostels and hotels in and around Almaty to suit all budgets.

Sky Hostel has excellent views from the roof terrace and is my number one hostel in Almaty.

Hotel Astana is a great mid-level option in a convenient location.

Hotel Kazzhol is a great hotel if you are looking to splurge, with its gym, pool and superb breakfast.

Almaty is easily reachable from the rest of Kazakhstan by train, bus and flight. There are overnight trains between Almaty and the capital Nur-Sultan (formerly Astana), Karakanda and Shymkent.

When taking the train it’s usually possible to buy a ticket on the day of travel. However, if during the holidays you should try and purchase a couple of days in advance. See the Kazakh Railways website for times and fares and to book tickets online.

Below are guides on how to get to Almaty from neighbouring countries:

From China: Urumqi to Almaty

From Kyrgyzstan: Bishkek to Almaty

From Uzbekistan: Tashkent to Almaty